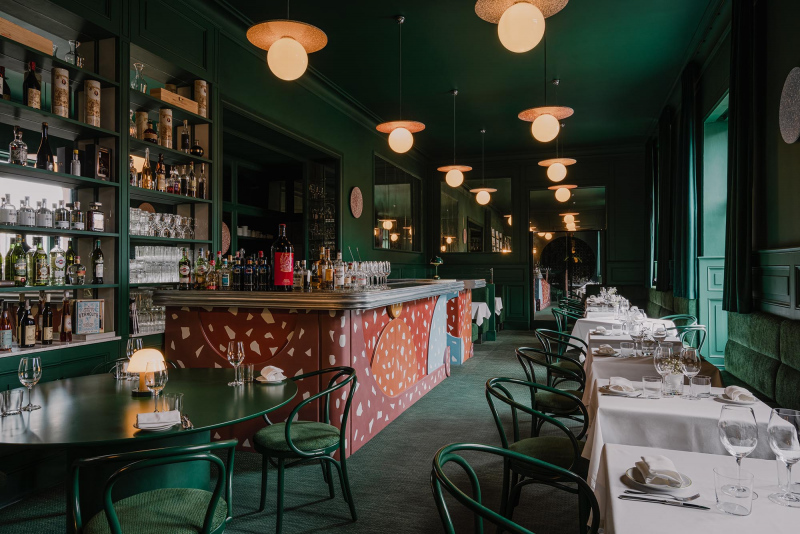 Le Braci is green not only by colour but also by sustainability. We upcycled parts of old venue’s interior such as bar, furniture and lamps. They were reshaped using colour, recycled porcelain and vinyl to match our concept - a tribute to plate. Plate exposes food and we put plate at display. It fades when colourful food appears so does our project. Shattered crockery, smashed china and a pinch of green are this restaurant’s distinctive features.

Owner's brief was to make a big change sparing old interior. Challenged we used the sequence of rooms as a script and dark green hue as a stage background. Huge, over three meters’ tall stacks of old plates piled in the lobby were cast in epoxy resin, wobbling as if they were to collapse. Then in following rooms plates debris can be found in porcelain terazzo cladding bar and light fixtures we designed recycling old ones. The magic came with innovative technology of sinking plates' aggregate into pigmented cement.

Playful colours of Biel Mozaic terrazzo used inside twinkle against deep dark green walls and ceiling of this space that dates back to late fifties. After dusk large windows show even more colours decorated by hanging glossy mdf cut outs and Malwina Konopacka's vases. At the entrance we designed a composition of nearly 600 plates put against the wall in piles that are seemingly about to fall into pieces. In this project we used finally over 1000 kg of smashed crockery from Ćmielów - one of the first polish porcelain factories opened in 1790. It was used to produce elements such as slabs cladding bar and wall in VIP room or to finish window sills. We also employed smaller fraction of china in our customly designed pendant lamps and sconces.
To put limit to wasting we reused old elements of interior, and introduced sustainable materials such as Biel Mozaic which recycle porcelain or Bolon vinyl carpets made of plastic waste. The modern geometry in our design was inspired by the circular form of the plate which was then decomposed to create shapes of green wall vinyl tapestries or window panels. We wanted to show the change from outside despite the owner’s need to obscure the windows. Our decorations block excessive sunlight still letting the interior permeate to the street. It was a challenge but played very well filtering direct light and preserving the feel good green atmosphere.